The Faith Friendly & Allies employee resource group at Rockwell Automation helps to educate employees about all faiths, with a goal of cultivating harmony.

It has been more than nine years since the deadly mass shooting in 2012 that took the lives of six worshipers at the Sikh Temple of Wisconsin in Oak Creek — just south of Rockwell Automation’s Milwaukee headquarters. A Rockwell employee lost his godfather, the temple president, in the tragedy.

Around the same time, a small group of Muslim employees had been requested to spread awareness about their faith to coworkers. But when a promotional flyer for an event was misinterpreted as proselytizing, employees of all faiths began to organize a more comprehensive way to educate and inform employees about their coworkers’ religions.

“We were coming together during a trying time where we saw a need for people to learn about different cultures and religions,” says Gopi Reddy, program manager in software and control and current vice president of FFA. “The goal wasn’t to promote one faith over any others, but to encourage learning and understanding about all cultures and faiths.”

Gopi, who practices the Hindu faith, has been a member of the ERG since its inception and has held various roles in the group.

“People sometimes think we do Bible or religion studies — but we don’t. We aren’t here to study any religion, convert anybody or compare one faith to another,” says Ayman Alamy, project manager on the global software operations team and former FFA president.

Rather, FFA has played a key role in educating employees about different faiths. Through a lunch and learn series, the group has invited speakers from inside and outside of the company to present to employees. It also hosts events like the annual Mini Faith Fair and Networking Day.

At work, having an awareness of the rituals and holidays observed by coworkers can be helpful, says Linda Kasulke, paralegal and former FFA president. That includes knowing when global and religious holidays fall on the calendar to being aware of fasting month, like Ramadan for Muslims, or the dietary restrictions of different faiths and cultures.

“It’s important to know about rituals and holidays that so when you’re scheduling meetings or lunches, you can be cognizant and foster better relationships,” Linda says.

Faith-based ERG: An example of success

Religion hasn’t always been considered a work-friendly topic, but that is changing. This ERG acknowledges that, for some employees, bringing their whole selves to work includes their spirituality and faith. In that way, the group contributes to a respectful, inclusive environment for the diverse global population of 24,500 employees at Rockwell, Ayman says.

Faith-based ERGs aren’t as common other types of employee resource groups in corporate America, so the success of the Rockwell Automation group is held up as an example for others to follow. The ERG has also partnered heavily with a local nonprofit, Interfaith Conference of Greater Milwaukee, to bring in speakers and consult about programming.

“We’re providing a positive example for other companies,” says Ayman. “It is a privilege that Rockwell has. We are among very few companies to have the courage and the guts to talk about religion and faith in a nuanced and fair way.”

Linda agrees that this is a huge differentiator for Rockwell Automation.

“Rockwell is willing to address the difficult subjects. Most companies won’t touch the topic of religion because it can be controversial, but we’ve done it and we’ve done it successfully,” she says. “Not every company is willing to go out on a limb and encourage employees to find out about different faiths. Being open to that promotes harmony and camaraderie.”

FFA has grown to nearly 200 members and represents employees from all of the major faiths, including Christianity, Islam, Hinduism, Buddhism, Judaism, and more.

Making a difference for employees of all faiths

“This ERG has been essential for me because I am a Muslim, and we pray five times a day. That means at least one prayer per day happens during work hours, and it’s something I used to hide from my coworkers,” Ayman says.

A prayer takes only a few minutes, but he used to find a conference room, close the blinds, lock the door and do it quickly. Now, thanks to feeling more comfortable and confident being open about his faith at work, he prays openly in his office.

Thanks to the advocacy of FFA members like Ayman, people of all faiths also have access to a multi-faith prayer room at the Milwaukee headquarters building.

Linda, a practicing Christian, says it has been a tremendously enriching experience to work with fellow ERG members like Ayman and Gopi.

“Growing up in a primarily Christian area, it has been wonderful to learn about the different faiths represented at Rockwell. We all have more in common than I would have thought,” she says.

FFA’s motto, Linda points out, is "we help people live in harmony” — something that is very important to the foundation of a diverse and inclusive culture.

“Once you understand someone else’s faith, you’re not afraid of it. You can actually embrace it. For example, I didn’t know anything about Islam, and I have learned so much,” she says. “There are a lot of stereotypes about all religions, and we want to help dispel them.”

With ongoing educational programming in the works, Ayman hopes that message of unity and connection continues to spread.

“Our vision is to lead and model acceptance of all faiths and beliefs through promoting harmony,” he says. “We tell people we’re in the business of spreading harmony.” 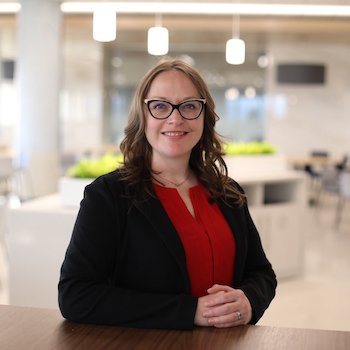